Three weeks ago, JCRC’s latest Christian Clergy Study Tour set out on our journey to Israel. The group comprised thirteen Protestant clergy members from across racial, socioeconomic, denominational and theological lines. Co-chaired by Rabbi Elaine Zecher of Temple Israel of Boston and JCRC trip alum Reverend Kent French of United Parish of Brookline, our group members were African American, West Indian, Latino, and White; Presbyterian, African Methodist Episcopal, Baptist, Lutheran, Pentecostal, and from the United Church of Christ. Our ages spanned from 20’s to 60's. Most had never been to Israel, and the few who had were there many years earlier, generally with little exposure to the Jewish-Israeli narrative. The group was united by a passion for an encounter with the land of their Scriptures, a thirst for engaging with complex realities and conflicting narratives, and, perhaps most of all, a deep desire to emerge with a sense of hope for the region’s future.

On our first morning, we set aside our jet lag to hear a presentation by veteran journalist Nathan Jeffay, who shared his experience covering Israel for multiple media outlets, including New York’s Jewish Week and London’s Jewish Chronicle. Jeffay told us that over his years of reporting, his editors’ directives had been consistent: stories of conflict and violence were always of most interest to readers, and each piece should include no more than two or three ideas at most. He cautioned the group to keep that in mind when consuming media pieces about Israel. Reading stories from afar would never result in the kind of multi-textured and nuanced understanding that is possible through direct encounters. Jeffay’s message rang with wisdom and truth throughout our trip, as we were exposed daily to a multiplicity of ideas and perspectives and learned of exciting initiatives on the ground to build a better future for Israelis and Palestinians.

A few scenes from our journey: 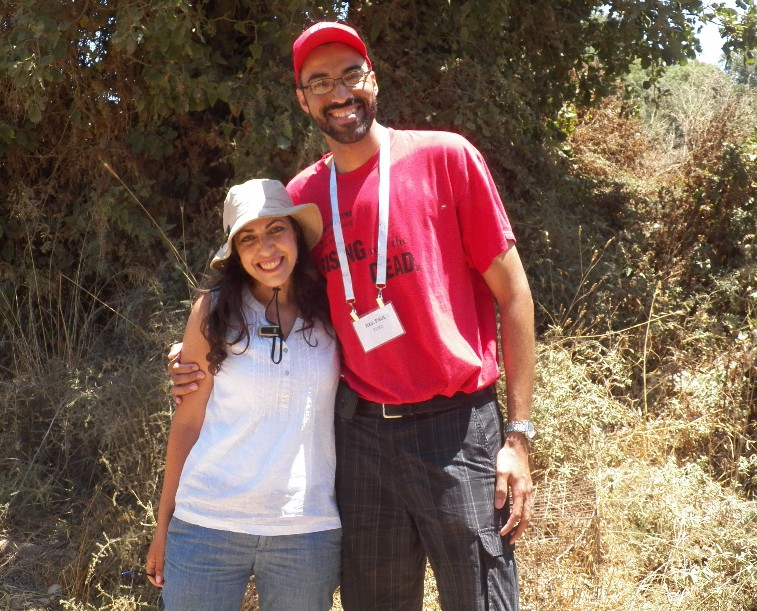 A moment early on in our trip continued to resonate powerfully throughout. We visited the Lebanon border with IDF Major (Ret.) Sarit Zehavi, a former senior intelligence officer responsible for preventing collateral damage to Lebanese civilians. We peered into nearby Lebanon and noticed a large Hezbollah flag in full view. Our veteran Israeli tour guide who visits this site regularly shared his unease at this new addition. Major Zehavi offered her no-nonsense Israeli perspective; that the only way to achieve peace is through demonstrating military strength and readiness for aggression when necessary. One of our pastors engaged her in a robust debate, respectfully challenging her assertion. But before we left, he asked whether she would permit him to offer a prayer on her behalf, so we joined hands as he led us in a fervent prayer, asking for peace and security for her, her family living just miles from this place, for the people in Galilee and those on the other side of the border. 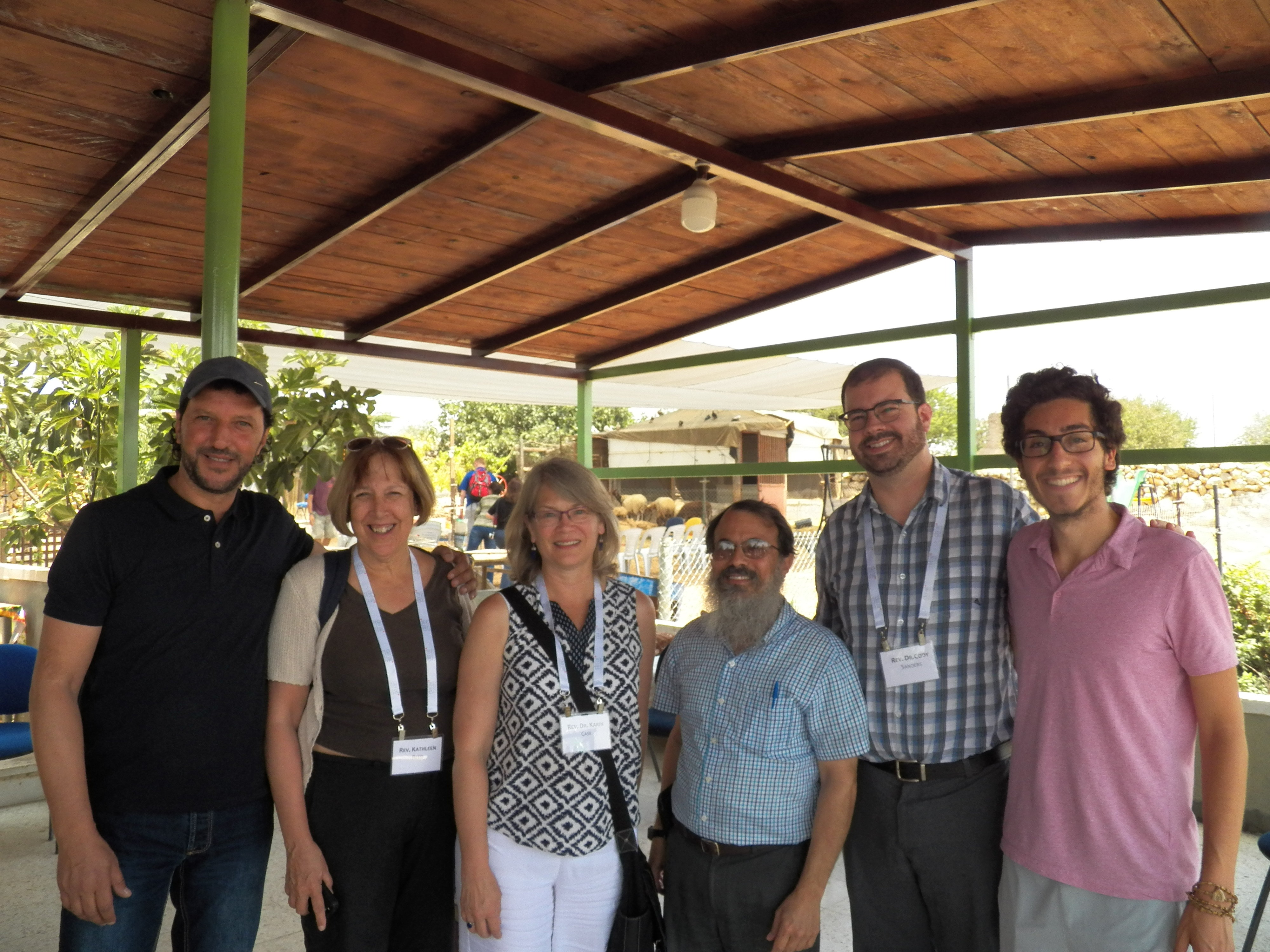 We visited the dusty tent of a fledgling NGO called “Roots” in Gush Etzion (above). There we met with Rabbi Hanan Schlesinger (third from right), who co-leads this organization, promoting Israeli-Palestinian understanding and mutual recognition, along with his Palestinian partner, Ali Abu Awad (far left). Rabbi Schlesinger identifies as a Zionist and settler, and believes that the Jewish people is fulfilling God’s promise by renewing its age-old tie to the Biblical land of Israel. But he shamefully acknowledged that the truth and righteousness of his story had blinded him most of his life to another story and another truth. With great passion, he described the transformation he experienced once he got to know his Palestinian neighbors, and he began to understand their experience of living in the same land, but under occupation. Ali described the multiple traumas that he and his family suffered, including the death of his brother, who was fatally shot in an argument with an Israeli soldier. When Jewish members of the Parents Circle reached out to his bereaved family and came to pay their respects, for the first time Ali saw Israelis not as his enemy, but as people whose tears of grief were no different than his own. He committed to a life of non-violence and to working with those whose partnership would be most essential for peace; not liberals drinking lattes in Tel Aviv, but the settlers who were his neighbors. The courageous leadership and stubborn optimism of Hanan and Ali left lasting impressions on our group.

Finally, we traveled south to Moshav Netiv Ha’asarah (above), right along the Gaza Border. We heard from Susan, a veteran community member who moved there decades ago, motivated by her idealistic vision of working the land in a close knit Jewish community. Since the 2005 Israeli withdrawal from Gaza and the subsequent Hamas takeover, her community has found themselves subject to frequent attacks. Now, along with trying to sustain a thriving farming community, they have had to prioritize security concerns, constructing ever more sophisticated shelters and rerouting their school bus to avoid being targeted by rocket and mortar fire. And yet, the change that they lament perhaps the most is the disconnect from their neighbors in Gaza with whom they once had frequent contact. When one of our ministers asked whether they were still in touch, Susan said that they were, through periodic phone conversations. Though they are careful about the information they transmit, they still care about each other and know that the connection they share is much more powerful than all that divides them; the universal human desire to provide good lives for their families and live in peace.

The mantra repeated throughout all of our study tours is that participants can expect to go home with even more questions than they came with. Once again, that was the experience of this cohort, as they acknowledged the complexity they encountered, one that defied black-and-white thinking and oversimplification. As Jeffay predicted, our engaging directly with the land and its people offered far more than the ideas available in the press, or a picture limited to conflict and violence. And yet, despite the diversity of our encounters and the vast differences in background and ideology among those we met, binding them together was their shared humanity and collective aspiration to live in peace. These Israeli and Palestinian change-makers now have thirteen American faith leaders who will be praying passionately for that to be so.