Last week I wrote that, despite our current political uncertainty, the core values and the foundation of JCRC’s work remain constant. High on our list is providing young people with meaningful experiences to inspire service and civic participation.

As we recognized Veterans Day last Friday, five student winners of our annual Israel Arbeiter Holocaust Essay Contest traveled with JCRC to tour the United States Holocaust Memorial Museum in Washington, DC. Phuong Nguyen, the first place winner, now in 12th grade at Malden High School, is more keenly aware than most people her age about the importance of learning from the lessons of the past. Phuong’s mother and father lived in wartime Vietnam. As she wrote, “The war decimated their homes and forced them to separate from their family and relocate to the countryside. The soundtrack to my mother’s childhood was the sound of bombs dropping in the distance.” Now, she says, it is her responsibility not only to learn from the past, from the horrors of the Holocaust and the injustices faced by her parents, but to use that to create a better future.

“I hold myself to an expectation, as every individual should, to treat others with respect, with care and love, despite disputes and differences. Kindness comes in many forms.  It entails speaking up when no one else will, especially when no one else will.  I owe it to the muted voices of the past to speak up today.”

After experiencing the Holocaust Museum and hearing a firsthand account from a Holocaust survivor, Phuong is more determined than ever to make sure the evils of the past are never repeated. Our second Veteran’s Day program provided a different opportunity to learn from those who came before us, this time by engaging with local senior veterans and hearing their stories of service. JCRC co-hosted a day of service with Hebrew Senior Life at Newbridge on the Charles in Dedham. Families from Temple Beth Elohim in Wellesley came to serve breakfast to over thirty veterans.  Parents and kids as young as seven came to take each veteran’s breakfast order and to learn about them. Within minutes, the kids were talking with the residents about their experiences in the military, most of which were during World War II. 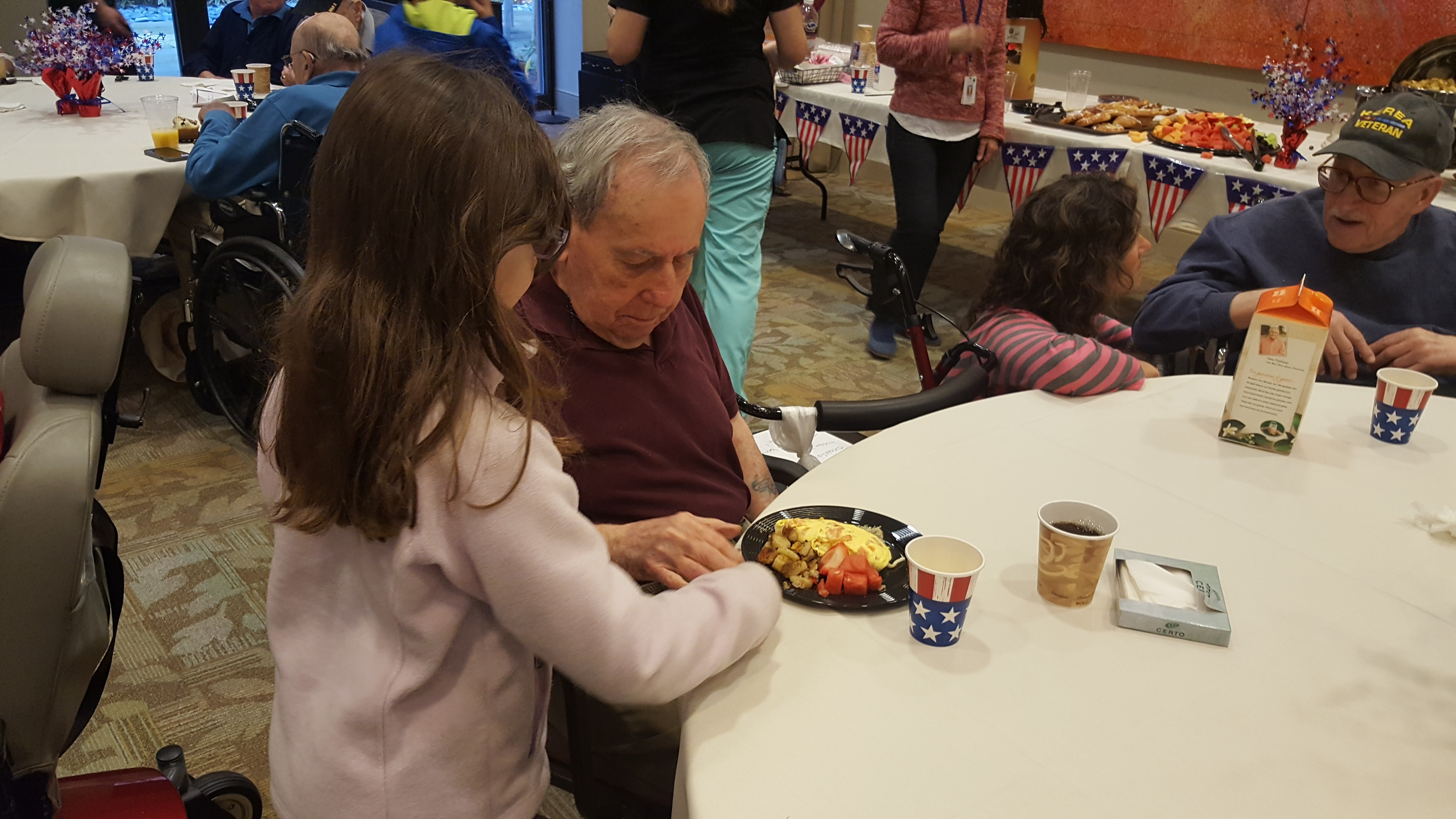 “I got my whole family to come,” said Jessica, one of the youngest volunteers of the day, referring to her mother, father, and sister. She said, “I really like helping people. And I like being here because we get to serve them just like they have served for us.” As the meal ended, the children solemnly read the names of each veteran in attendance, along with the military branch in which they served, and their rank. Everyone hugged and families escorted the residents back to their rooms, with promises to visit again.

Later in the day, middle and high school students from Prozdor joined the residents at Newbridge to honor veterans and discuss the lessons from World War II. Residents shared their memories of the past, along with their reflections on the current political climate. Students expressed frustration that the unity that brought a nation together during World War II is so sorely lacking now. “They were so much more united then. Things are so divided now, I don’t know how you fix it,” said a Prozdor student. There were hopeful conversations as well. Residents described how, during the war, they felt empowered to help their country the best way they could. They urged young people today to do the same; to find a way to help our country. programs give me hope, as we see young people embracing the urgency of civic engagement in a deep way. I’m confident that by learning from the past, they will forge a path forward in times that are uncertain. I’m encouraged that even at this young age, kids are putting “helping others” at the top of their list. I’m heartened that these students are thinking critically about the past and learning to stand up for justice. 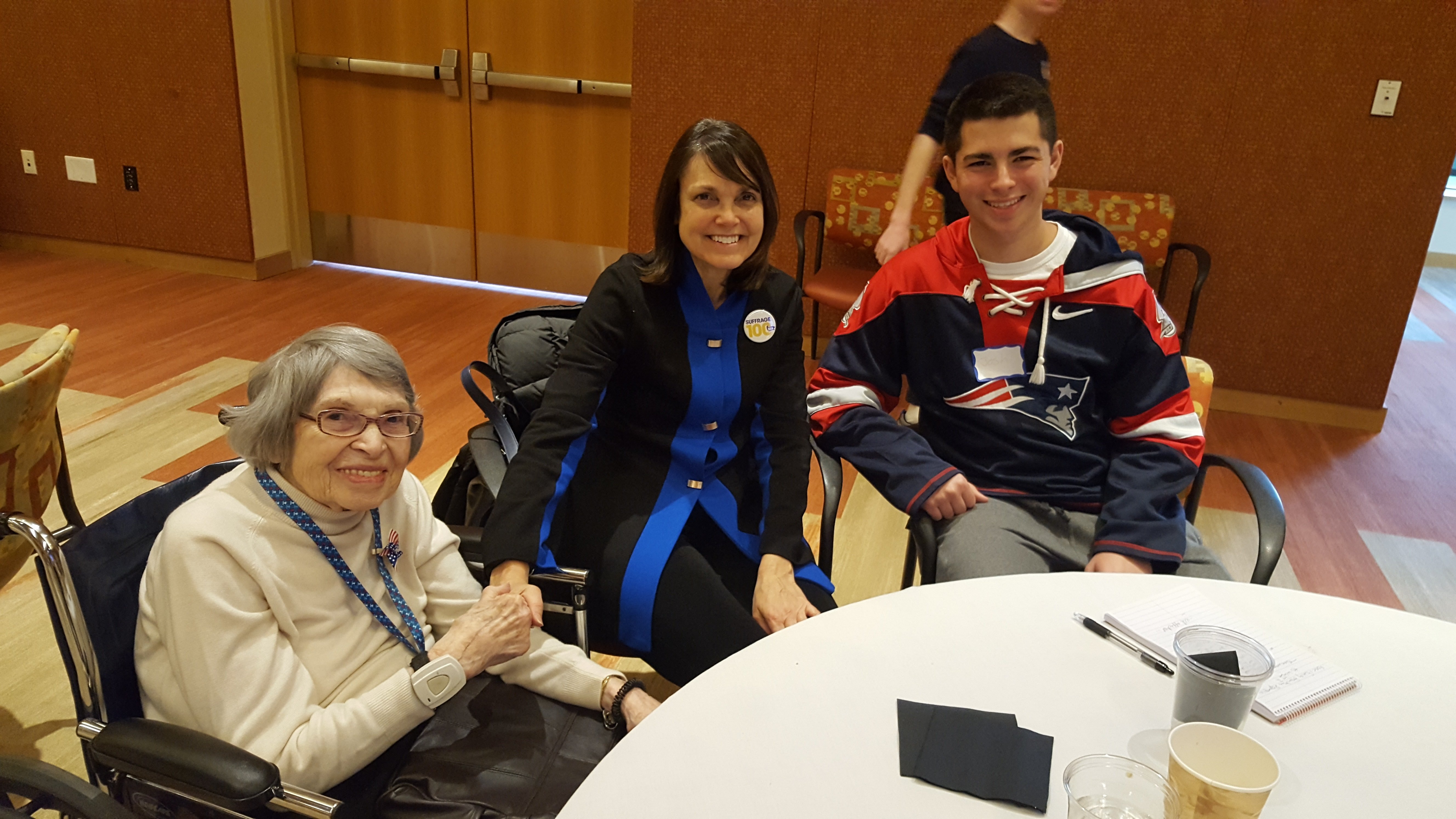 This is the kind of education – through service, and through Holocaust education - that we do at JCRC, on Veterans Day and every day. Because we need these thoughtful young people now more than ever, for our future, and theirs.