Today, sadly, we witnessed yet another terror attack in Israel – the fourth in a series of escalating attacks over the past two weeks targeting the civilian population of Israel. We share the immense pain of the families and are heartbroken by the tragic loss of life.

We stand with Israel in the face of this ongoing wave of terror, pray for the speedy recovery of the injured, and extend our deepest condolences to the victims’ loved ones.

We echo the comments of Issawi Frej, Minister of Regional Cooperation and an Arab citizen of Israel: “When these people attack, they don’t only attack Jews, they attack all human beings, they attack you and me and everyone who is looking for hope and for peace. We must not let these extreme people take us to a dark place.”

Extremists who oppose reconciliation and normalization can never silence those who work hard every day toward a vision of two states for two peoples, living side by side in peace and security. This indiscriminate and senseless violence has taken the lives of Arabs, Druze, Christians, and Jews alike – including Ukrainian foreign workers. We call upon all those who wish for a better future for all of Israel’s citizens to join us in condemning these cowardly acts of terror. We join with our brothers and sisters in Israel in mourning Sgt. Ron Yitzhak Kokia (z”l), 19, stabbed to death by a terrorist while waiting for a bus in Arad last night. Ron, a native of Tel Aviv, served in the Nahal Brigade, a unit based outside the southern Israeli city where he was murdered.

The assailant remains at large, with a widespread manhunt continuing in Israel today. We pray for a time when the people of Israel can live in peace and security. Our hearts go out to Ron’s family, his friends, and the many people who mourn him today. May they find comfort among the mourners of Zion and Jerusalem.

This morning we awoke to the heartbreaking news of a terror attack on Israelis. The attack took place in Har Adar, a Jewish community northwest of Jerusalem when a terrorist opened fire on a group of Israeli security officers as they were opening the settlement entrance to Palestinian workers.

The three murdered Israelis are border policeman Solomon Gavriyah, age 20, from Be'er Yaakov, Youssef Ottman, age 25, from Abu Ghosh and Or Arish, age 25, a resident of Har Adar. A fourth man was seriously injured in the attack and underwent surgery at the Hadassah Hospital Ein Kerem in Jerusalem.

The terrorist from the nearby Palestinian village of Bayt Surik, was shot and killed by security forces at the scene. Hamas praised the attack and called for others to carry out similar ones. United Nations Special Coordinator for the Middle East Peace Process, Nickolay Mladenov responded with a statement, “It is deplorable that Hamas and others continue to glorify such attacks, which undermine the possibility of a peaceful future for both Palestinians and Israelis. I urge all to condemn violence and stand up to terror.” 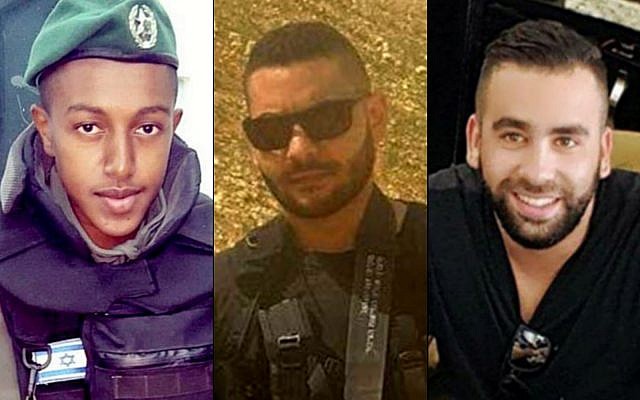 Our hearts go out to the bereaved families of the victims, and we pray for a full and speedy recovery of the wounded. In these Days of Awe between Rosh Hashanah and Yom Kippur, we pray for peace and security for our brothers and sisters in Israel. May all of us be inscribed and sealed in the Book of Life.