I’m just back from two weeks of vacation. I’m grateful to work with a strong team that covers for each other as we take respite. I hope that, in my absence, you appreciated the blog posts from my colleagues.

I’m also still thinking about our study tour in Israel that wrapped up just before my vacation, and one particular visit we made.

Netiv Ha’Asara (The Path of the Ten) is a Moshav (co-operative village) right along the Gaza border. Founded in the Sinai after the 1967 victory,  the families were then evacuated as part of the peace deal with Egypt in 1979. They decided to stay together as a community and re-form their village inside ‘undisputed’ Israel (as our host, Raz, describes it).

Living in the firing line of every hot conflict since Israel’s withdrawal from Gaza in 2005, they have less than  fifteen seconds to find safety when the red alert goes off. Raz shows us the Hamas terror tunnel exit near the greenhouses that had to be blown up during the 2014 conflict. He takes us to the sniper wall, before the border wall, that protects them from Hamas operatives sitting on the other side. We can see the Hamas lookout towers and forward positions, including a new building that appeared overnight a few months ago.

We ask Raz how he helps his children to cope with the reality of living like this, with a bunker in the middle of their playground. He tells his children that it is ugly in Gaza and that what's happening there is awful. He tells them that most people in Gaza didn't vote for Hamas in 2006 and that most Palestinians in Gaza don’t want to kill them. He believes that most people on the other side of the wall share his hopes for a better future. 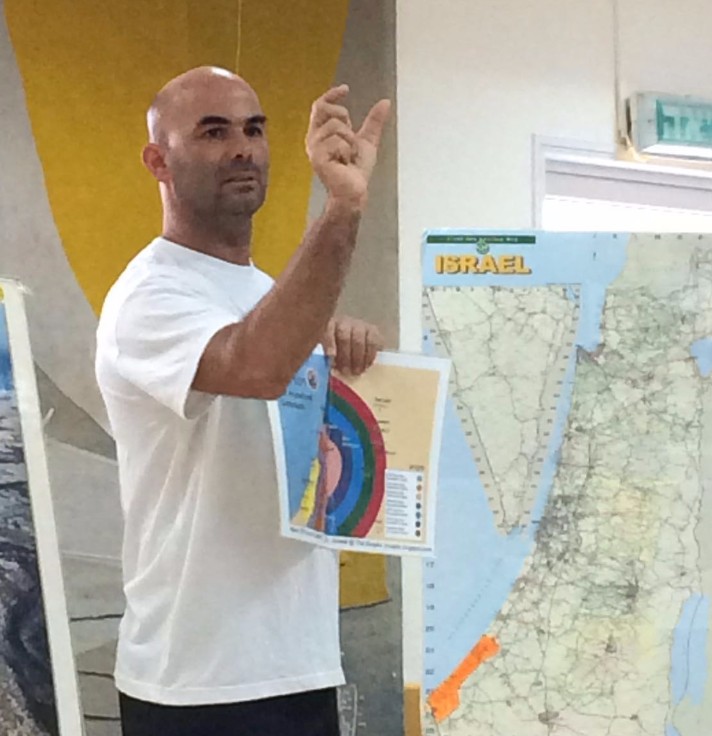 Raz knows this deep in his gut, since before the withdrawal he was a teenager who played basketball every week with those kids less than half a mile away. And he expresses his fervent hope that those childhood friends are telling their kids the same message about Israelis.

Then Raz takes us PAST the sniper barrier. We’re facing the Gaza border wall some 100 feet in front of us. Behind us on the sniper wall is a glorious piece of ceramic art. It is called Netiv L'Shalom - The Path to Peace. Each ceramic piece, in all their gorgeous colors, is a prayer for with one word: 'Shalom,' or 'Salam,' or 'Peace.'

I’ve fallen in love with these villagers living a crazy, impossible existence under protection from snipers who consider them as 'occupiers' even here (and throughout the entire country, "from the river to the sea"). Because rather than live with the despair of an ugly wall as a monument to violence, they reimagine it as a piece of art, a thing of beauty, and as a prayer for peace - in Hebrew, English, and Arabic.

I love their hopes and dreams. I want them to be able to live without fear, right where they are.

I also leave with a sense of urgency about an additional challenge created by the necessary separation.

I believe that the better future Raz hopes for is possible. But to build it 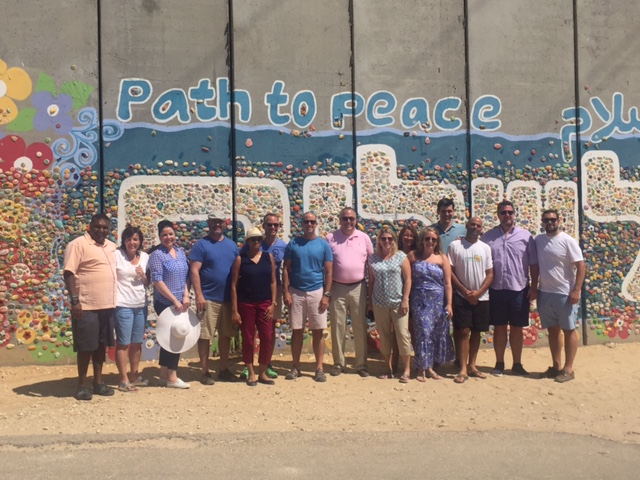 these people need relationships that foster co-existence. Israelis and Palestinians need to connect with and affirm each other’s humanity. Without that recognition, of national narratives and personal experiences, what happens at a negotiation table can never – on it’s own - end the conflict.

We need to do more to support efforts on the ground that build co-existence. We have to help cultivate conditions that will support a lasting ‘peace.’ We’ve got to invest in those who are building the paths that lead - through understanding, relationships, and shared aspirations – to peace.

May it come soon.